We held our first monthly meeting yesterday and are feeling very confident of our future.

About 60 people turned up to hear Dr Victoria Metcalf talk on climate change. Victoria is the youngest daughter of our president Lena. She has a PhD in Biochemistry and is interested in Antarctic fish along with climate change. Her job over the years has taken her on many visits to the Antarctic where she investigates how fish survive in such extreme cold and their use as bellwethers for climate change. Victoria has received a number of awards and scholarships and is passionate about communicating science to the general population.

Victoria concentrated on the part that oceans play in climate and how changes in the oceans are driving changes in the climate. The oceans store much more carbon than the atmosphere or biosphere; the carbon dioxide being converted to carbonic acid (H2CO3), carbonate ions and bicarbonate ions.

Over the past 55 million years natural events have caused large changes in the oceans. These changes have been gradual and life has been able to adapt and evolve. During the industrial era the ocean acidity has increased by 30%. The rate of change is too rapid for adaptation and will likely results in extinctions.

There is very strong consensus on human-caused climate change among the scientific community. A paper published 14 September 2014 determined that there was 99.999% certainty that humans are driving climate change.

Some sources for further reading (these links will open in a new tab): 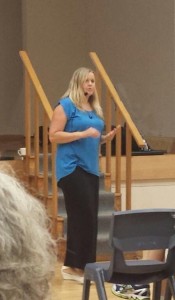 This entry was posted in Uncategorized and tagged climate change, Getting started, U3A, Victoria metcalf. Bookmark the permalink.